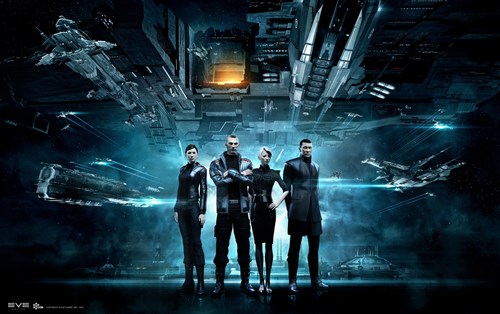 A state built on corporate capitalism, the Caldari State is run by a few megacorporations which divide the state between them, controlling and ruling every aspect of society. Each corporation is made up of thousands of smaller companies, ranging from industrial companies to law firms. All land and real estate is owned by a company which leases it to the citizens, and government and policing are also handled by independent companies.

A ship of the Kaalakiota corporation enroute to New Caldari.

Although this gives the corporations dictatorial powers, they are just as bound by Caldari customs and laws as the individual, and the fierce, continual competition between the corporations ensures a healthy, consumer-based social environment, which benefits everyone.

While the Caldari State may not be nearly as big as that of the Gallenteans, let alone the Amarrians, they are still universally feared and admired. Their economy is strong, and their military might parallel to that of the larger empires. Coupled to the fact that they are more unscrupulous than the Gallenteans and more combative than the Amarrians, this makes them in many ways the most meddlesome of all the empires. As most Caldari trade is conducted by individual companies rather than the State itself, this makes it difficult for the other empires to deal with them at a political level. If a company is found guilty of unethical business dealings, it simply disappears into its parent corporation, and before long another one appears to take its place. But if a Caldari company is threatened, the whole corporation and often the whole State backs it up with full force.

Scene from Splinterz, robotic duels that the Caldari love betting on.

Caldari society is steeped in military tradition. As a people, its members had to fight a long and bloody war to gain their independence, and even had to surrender their home planet to their hated enemies, the Gallenteans.

It was at this time that the corporations established themselves as the driving force behind creating and maintaining the new Caldari State. Even if the Caldari have not engaged in war for many decades, they still strive to be at the cutting edge of military technology and their vessels, weapons and fighting methods are inferior to none but the enigmatic Jovians.

To curb their aggressive tendencies, the Caldari actively pursue and sponsor a range of sporting activities. Many of these are bloody, gladiatorial-like competitions, while others are more like races. But whatever the sport, the Caldari love betting on the outcome, making gambling a massive industry in the State.

The Caldari State offers its citizens the best and the worst in living conditions. As long as you keep in line, do your job, uphold the laws and so forth, life can be fairly pleasant and productive. But for those who are not cut out for this strict, disciplined regime life quickly becomes intolerable. They lose their respect, family, status, everything, and the only options left to them are suicide or exile. Although not xenophobic as such, the Caldari are very protective of their way of life and tolerate only those foreigners that stick to the rules.

The Caldari State stands for corporate capitalism in its purest form. There are eight great Corporations that together own more than 90% of all property within the State. Each of the corporation is made up of thousands of companies of various sizes and various sorts, ranging from simple mining companies to powerful police companies. There is no single, unified government as such, each corporation rules it's territories like their own kingdom with little or nor interference from the other corporations. In higher matters, such as in foreign policy towards the other empires, the Chief Executive Panel, which consists of the CEOs of the eight major corporations, has the highest authority. The Chief Executive Panel also makes sure that the social infrastructure of the State remains intact and settles all major quarrels between the corporations.