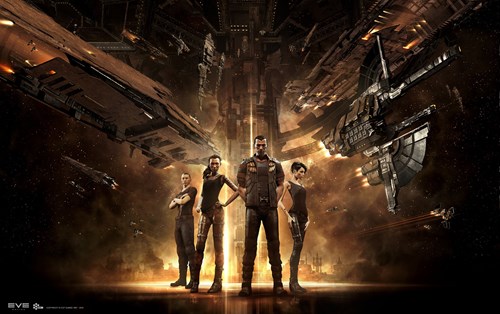 A tough, no-nonsense race, the Minmatar are a determined and independent people. Their home planet of Matar is a natural paradise, although centuries of abuse have taken much from its beauty.

For the Minmatar, the most important thing in life is to be able to take care of yourself on your own, and although kin and family play an important role in their society, they prefer identifying themselves by the clan or tribe to which they belong. A clan can have any number of people in it, and its size is largely dictated by the main activity of its members. Most specialize in one area of activity. While those who live on a planet can focus on agricultural or industrial activity, others who travel around the world of EVE concentrate on trading, pirating, and suchlike.

A Minmatar soldier during the Minmatar Rebellion.

In the distant past the clans constantly warred against each other. Since then, however, Minmatar have learned that cooperation is more important, and although the clans still try to maintain their regional and ideological identities, they act as a single unit towards other races.

The fortunes of the Minmatar have ebbed and flowed continuously. At one time they had a flourishing empire with a level of mechanical excellence never before or since seen anywhere. Later, however, they had to endure centuries of enslavement, toiling and dying for the benefit of foreign masters. Today most of them have regained their freedom, but the legacy of their enslavement has been the diaspora of the race.

The Amarrians are fond of using mind-controlling cyber-implants on their Minmatar slaves.

The Minmatar are the most numerous of all the races in the world of EVE, but their vast numbers are divided into many factions. While the Minmatar Republic is the official state, only a quarter of all Minmatar are part of it. The largest proportion, almost a third, are enslaved within the huge Amarr Empire, while a fifth resides within the Gallente Federation, creating a powerful political bloc which keeps relations between the Gallenteans and the Amarrians in a constant state of tension. The remainder, who are not part of any formal organization, live as freemen throughout the world. Many are itinerant labourers, roaming from one system to another in search for work. A fair number make their living on the darker side of the law, acting as pirates, smugglers and peddlers in all kinds of illegal goods, and many of the larger criminal groups in the world of EVE are run by Minmatar.

The Minmatar Republic is very much based on tribal society. The Republic's justice system is handled on a tribal level. Tribes have their own courts and judgment halls.

The Starkmanir tribe was almost totally destroyed by the Amarrians after a crushed rebellion four centuries ago. Until recently, it was believed only a handful remained as slaves within the Amarr Empire. The Nefantars collaborated with the Amarrians during the occupation of Minmatar territory. They were driven out alongside the Amarrians during the Minmatar Rebellion and became known as the Ammatars. Lastly, the Thukkers were widely scattered throughout New Eden in the course of the Amarr occupation, their tribal bindings are loose and many of them don't even consider themselves to be a part of a tribe any longer. A great number of Thukker have rejected many of the strongest traditions of the Minmatars, such as tattooing.

However, much has changed in the last decade or so, and many Nefantar, the Starkmanir and even the Thukker are now turning back to their homeland in great droves. A remnant of the Starkmanir survived hidden within the Ammatar Mandate and returned to the Republic alongside a great number of Nefantar defectors. The nomadic Thukker Tribe, which had coalesced in the Great Wildlands since the Great Rebellion and foundation of the Republic, chose to formally rejoin the Republic on terms that maintained their autonomy in their home region. As a result, today a great many free Minmatar live in a Tribal Republic made up of all seven of the great tribes of Matar.

The large, fertile plains of Matar, home planet of the Minmatars, with endless herds of hoofed animals, proved ideal for a nomadic lifestyle. The fabulous conditions on Matar coupled with more than enough space meant there was less incentive to struggle to keep up the technology level after the closure of the EVE gate. For ages the Minmatars roamed this paradise, slowly divided by time and distance into numerous tribes.

The tribal community was ideally suited for nomads, but remarkably the Minmatars kept their strong tribal ties after urbanization began, even if some of its more strict aspects have declined in recent times, such as the stringent caste system and (for some of the tribes) acreage serfdom for farmers and workers. To this day, Minmatars identify themselves first and foremost through their clan.

The Minmatar tribes evolved their own traditions over time, but limited communications between them ensured a few basic similarities in their social structure. One of these is the pyramid structure of the tribe: each tribe has a number of family clans, which are then further divided into sub-clans based on occupation, geographical location and other traits (this is different between the tribes even if the overall structure is the same).

Each of the seven major tribes has a tribal leader; this person serves much the same role as a president or a head of state for each tribes. The authority of the tribe leader is unquestioned within the tribe, but he has little or no power outside his tribe. The clan structure is both one of the main strengths and main weaknesses of the Minmatars. On the one hand the strong tribal bonds have kept the Minmatars pure in their cultural heritage, but on the other hand it makes them politically weak and vulnerable versus the other empires.