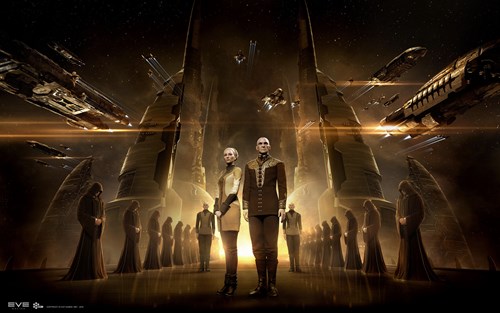 The largest of the empires in the world of EVE, Amarr spans 40% of the inhabited solar systems. The Amarr Emperor is the head of a ritualistic, authoritarian imperial state, and below him are the Five Heirs, the heads of the five royal families from which a new Emperor is chosen. The Emperor's authority is unquestioned and absolute, but the archaic and bureaucratic system of government makes it difficult for him to exert his rule unless directly in person. Otherwise, the Five Heirs rule in his name, dividing the huge empire between them.

The Emperor and the Five Heirs can expect to live for at least 500 years. Extensive cyber-implants keep their frail bodies alive, even when their organs begin to fail. These cyber-enhancements date back many millennia, and have become a symbol of royal divinity in the eyes of the Amarrians.

An Amarr Holder, part of the Amarrian elite.

Always a deeply religious people, religion remains of great importance to every Amarrian, a fervour which at various times has been responsible both for great good and great evil. Shortly after recovering from the closure of EVE, they began to expand their realm at the expense of neighbouring states. The nations they conquered were enslaved, a practice justified by their religion.

Ever since, the Amarrians have enslaved every nation and race they have encountered, and today slavery is an essential part of Amarr society. This has, of course, tainted their relations with other races, especially the individualistic Gallenteans.

The Amarrians were the first of the races in EVE to re-discover Warp technology, notably Jump gate technology. After accomplishing this more than 2,000 years ago, they immediately began expanding to nearby solar systems, slowly building up their empire in the process. On the way, they encountered two human races, both of whom suffered the fate of being enslaved by the far more powerful Amarrians.

In recent years, however, the Amarrians have begun to run into serious opposition. First, they met the Gallente Federation. Although much smaller than the Amarr Empire, the Amarrians soon found the economic and military might of the Gallenteans a match for their own.

Soon after, the Jovians arrived on the scene and the Amarrians made a futile attempt to subjugate them, resulting in a humiliating defeat. To make matters worse, the Minmatars, enslaved for centuries by the Amarrians, used the opportunity to rebel against their slave-masters.

Since these fateful events almost two centuries ago, the Amarrians have learned restraint. They have slowed down their expansion and are less forceful in their dealings with other races, but still view themselves as the most powerful race in EVE, if only because of their sheer numbers.

The Amarr Heirs are the heads of the five royal families, the highest caste of the Holders apart from the Emperor family itself. Even if the emperor is the head of state his power outside his immediate vicinity is limited. The entrenched bureaucracy and the semi-feudal governing system means that all over the empire there are local lords that enjoy almost complete autonomy most of time. The Heirs are the most powerful of these lords. Each heir family has vast domains spanning dozens of solar systems. The power of the heirs can best be seen in the way each of them shapes their domain to fit his own wishes. The result is that the Amarr Empire is a patchwork of rules and regulations, customs and traditions.

The power of the heir families originates in the changes made during the Moral Reform some 1500 years ago, when the influence of the Apostles was curbed. The Privy Council, the unofficial government of the empire, also dates from this time and all the heirs sit on it. Four of the current heir families are the original families given royal status during the Moral Reform. The fifth is a recent addition after the Khanid family was exiled. The five families are: the Ardishapur family, the Kador family, the Sarum family, the Kor-Azor family and the Tash-Murkon family (the new one). The heads for three of these families are introduced below. The Heir of the Ardishapur family is Yonis Ardishapur, a champion of the faith and avid collector of religious artifacts, some thought to date since before the closure of the EVE gate. The Sarum family has yet to name an Heir to replace Jamyl Sarum; its domains are currently run by its House Chamberlain