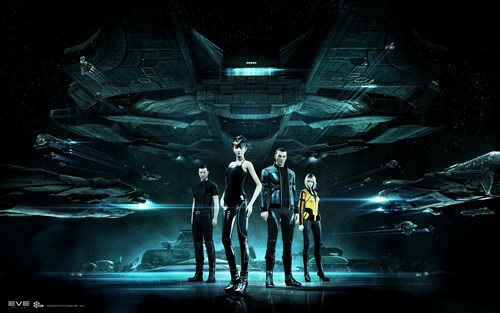 The Gallenteans. Self-righteous, meddling, pompous and tiresome, or virile liberalists and defenders of the free world. Love them or hate them, you simply can't ignore them. Everybody has an opinion on the Gallente Federation, it all depends from which side of the table you view them. For many, it is the Promised Land, where any dream can become a reality. Descendants of Tau Ceti Frenchmen, the Gallenteans remain strong believers in free will and human rights, despite numerous setbacks in their long history.

It has been said that, once you have seen the Crystal Boulevard in Caille you've seen it all. True, the view is spectacular, but if there's one thing you can never see in its entirety, that is the Gallente Federation. You may travel its length and breadth, marvel at the Sunspiral on Troux, climb the Akat Mountains on tropical Intaki or thrill to the Mendre dancers on Sovicou. Wherever you go, you will always see something new and exciting, even when you visit the same place again. Gallente society is in a constant state of flux, vigorous, vibrant and progressive.

A Senator debates some issues in the Federal Senate.

Few societies display such stark contrasts. Many of the wealthiest people in the world are Gallenteans, creating a constant demand for luxury goods. At the same time, the ranks of the poor number millions, because while the liberal market-driven economy and individual freedom may allow everybody the chance to advance to the top, they make it just as easy to plummet to the very bottom of the social ladder.

In the world of EVE, the Gallentean are the kings of entertainment, mass-producing everything from cheap porn-flicks to elaborate stage-shows for an ever-hungry public. They boast the most elaborate luxury space yachts, and the most glittering hotel reservoirs. Anything your mind or body could ever crave, the Gallenteans have plenty of it.

The Gallenteans are not alone in their Federation, whose boundaries are home to pockets of residents, varying in size and representing all the other races of EVE, most of whom left their own empires due to political or ideological differences, or simply in search of peace and prosperity. In addition to these there are two human races, the Intakis and the Mannars, both of whom the Gallenteans found while exploring and expanding their empire. Both were at a very primitive level when the Gallenteans found them, but since coming under the protection and guidance of the Gallenteans, both races have flourished and are today a full-fledged members of the Federation.

The Caldari were initially part of the Federation but deep-seated differences and mutual animosity between them and the Gallenteans drove them out to found their own empire. For a time, the two empires warred against each other, but as neither could gain sufficient advantage to claim victory, peace was settled in the end.

The Three Branches of Gallentean Government

The Gallente Federation was founded a little over 300 years ago. At that time the Federation consisted of 17 sectors or districts and four races. A district is a group of solar systems (of various sizes). The number of districts has steadily increased through the ages and now stands at 62. The four races at the Federation's creation were the Gallenteans (by far the largest of the four), the Caldari, the Intakis and the Mannars. The Caldari left a few decades after the Federation's foundation and set up their own empire. The other three remain and have since been bolstered by immigrants from all the races, most notably Minmatars. People of Minmatar ancestry number almost a third of the total population of the Federation.

The core belief of the Federation is that of individuality and individual freedom. But in practice this has created a paradox as the individual freedom to do what you want constantly clashes with the individual freedom from being oppressed by other individuals. Any governmental interference to keep things in check through legislation and policing is naturally perceived as oppression of the rights and freedom of individuals, constantly creating tension. But the Federation and its populace have learned to direct and control this tension, making it in many ways a positive thing. The result is an exceedingly vibrant society, constantly scrutinizing itself and its principles, spurring creativity and ethical notions.

The Federal Senate holds 881 members, with elections held every 5 years. The Senate is responsible for passing new laws and in supervising that the administration and the courts are behaving properly. The most important function of the Senate is in overseeing the taxation and fiscal spending by the government. In addition to the Federal Senate, each district has its own parliament (simply called district parliaments), whose official function is to advise and support the Senate on local issues, but in reality the parliaments wield a great deal of authority over the affairs of their district.

Lobbying plays a big part Gallentean politics. The lobbying factions have become an integral part of the system, affecting and even regulating everything from the elections to what bills are presented before the Senate. The other races point to the entrenched lobbyists as a clear sign of corruption and in the supposed Gallentean democracy, but the Gallenteans themselves regard the lobbyists as a robust system for keeping the Senate in touch with society, comparing their role to that of stock brokers in the trade hall.

The Gallente president is nominally the head of state and the most powerful man in the Federation, but this is not always the case. Some presidents were puppets of political factions acting behind the scenes, but most of them have acted independently, although always within the strict framework set by the lobbyist factions.

For many the president is nothing more than the smiling face of the government; an actor playing the role of the kind, considerate and generous father of the people. This notion is supported by the trappings of the presidency, its fabulous palaces and space shuttles, purposefully aiming to awe and amaze foreign visitors and Gallenteans alike.

The judicial system in the Gallente Federation is ever vigilant in keeping the Federation as wholesome as possible. The system is not known for being fair in their dealings with the Federation's citizens, as it almost seems like there are two different penal systems in use depending on the wealth of the accused. But even if the rich can expect some leniency in sentences imposed by the courts they don't get preferential treatment in the investigation of the crime, meaning that you are just as likely to be caught for a crime whether you're at the top or the bottom of the social ladder. And history shows that the social rejection by their peers is even more efficient in punishing the rich than a few years more or less in prison.

The highest judicial power is the Supreme Court, which consists of 13 judges, appointed for life by the president and approved by the Senate. Beneath the Supreme Court are the District Courts, one for each of the 62 districts.